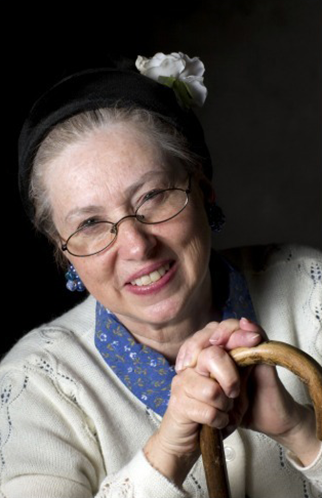 Who is Grannie Carter?

Some of my fondest childhood memories are of summer vacations spent with my grandmother in Lincoln Estates, Illinois. Grandma and Grandpa lived on a wooded acre in a cute little barn-shaped “doll” house. Gram was full of creative decorating ideas and Grandpa was a handyman who could make her creative wishes come true. It was a place of fun and adventure – riding imaginary horses on oak tree limbs, searching for treasure following home-made maps, donning beautiful thrift store formals while entertaining pretend guests on the side patio, and rocking a stray kitty to sleep while playing veterinarian – just to name a few! My Gram taught me to notice the delicate streaks of color on a petunia blossom and the innocent smile on a china figurine.

Growing up ‘down home’ in southern Illinois, Gram was the seventh in a line of nine children. At age 9, she assumed household and mothering responsibilities for her two younger siblings after their mother’s passing. Her zest for life and constant determination to improve her circumstances carried her through many of life’s trials. She persevered through the death of her parents; raised her two children during the Great Depression while caring for her husband who suffered from repeated strokes due to a car accident; remarried after the death of her first husband and shouldered the renewed responsibility of motherhood as she raised the young son of her new husband while her two adult children married and started families of their own; and in later life continued her education to build on the limited two-room school house learning she received as a young girl. Her 2nd husband’s death was followed by a move to Florida, where she lived independently for nearly 10 years. Gram returned to the North in order to care for her dying son who eventually lost his battle with cancer. Only seven months later, she was dealt another blow due to the untimely death of her daughter (my mother) as a result of heart failure. Some years after that, she was also faced with the death of her step-son. Gram often said that the hardest thing in all her life was the passing of her children.

At the age of 91, my grandmother came to live with my husband, our two teen-aged daughters, and me. Although her eyesight was failing, she maneuvered about our two story house and kept herself busy sweeping our deck, listening to radio programs, and books on tape. She held vigil on her platform rocker which was situated in our kitchen. There she entertained visitors of all ages, relishing the opportunity to chat with both young and old. Shortly after her 98th birthday, Gram went home to be with the Lord.

Grannie made her first appearance in 1990. The original character of Grannie was developed from a children’s ministry curriculum called ”Old West Glory Town”, but as time goes on her name, manner, and personality have taken on the likeness of my own grandmother. Grannie Carter’s knack for storytelling and love for people (two inherited qualities that Gram passed on to me) are matched only by her love for Jesus and a passion for His Word. It brings me great pleasure to incorporate my Gram’s personal stories in the truths that Grannie Carter shares about family, friends, and community.